Police raise concerns after 3 birds found to have been poisoned

Police have raised concerns after three birds of prey (1 Peregrine Falcon and 2 Buzzards) were found dead recently. Following further testing it has been established that two of these birds died linked to Carbofuran poisoning and one found with Alpha chloralose poisoning.

A Buzzard was found dead at a forest in the Glenarm area on March 15th. Both birds were tested to determine the cause of death and it has been determined that both birds were subject to Carbofuran poisoning.

A third bird (Buzzard) was also reported dead on March 29th also near Glenarm and tests have shown it was exposed to Alphachloralose.

PSNI Wildlife Liaison Officer, Emma Meredith, said, “Poisons can have serious implications and reports such as this give rise to serious concerns. Poison generally is very dangerous and we would have particular concern over any poison but particularly over Carbofuran. We are disappointed that this continues to happen especially with such a dangerous substance, which could kill not only birds of prey but also, a child, family pet or any adult coming into contact with it. We would remind the public if there is a suspicion on any bird of prey to leave the bird/s and/or bait in situ and call the PSNI as soon as possible. 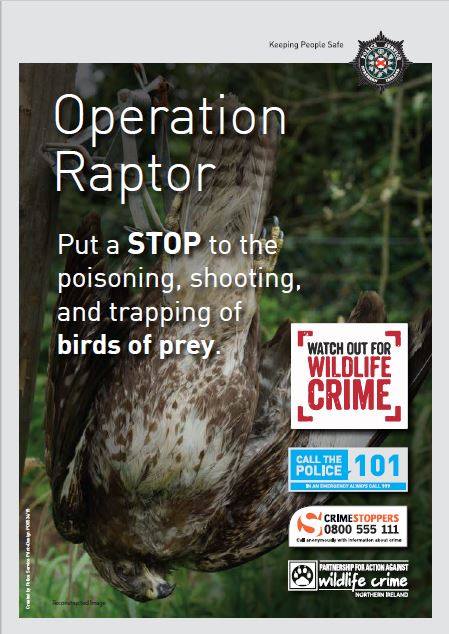 “If anyone has information about the death of these protected birds then we would be really keen to hear from you. The person responsible needs to be identified before other wildlife, domestic pets, or even humans come to harm.

“The PSNI, along with partner agencies (Agri-food and Biosciences Institute, Health and Safety Executive, National Wildlife Crime Unit, Northern Ireland Environment Agency, Northern Ireland Raptor Study Group, Royal Society for Protection of Birds), have been involved in the launch of Operation Raptor, designed to raise the profile of killing of birds of prey and to highlight known “hot spot” areas to combat this type of crime.

The Operation Raptor campaign was launched in March 2016 is designed to encourage members of the public to report to PSNI and also to warn offenders they could face a custodial sentence and/or fine (up to £5,000) if they are caught targeting birds of prey through poisoning, shooting or trapping.”

Anyone with information can contact police on the non-emergency number 101 or anonymously via Crimestoppers on 0800 555 111.