Following the successful launch of Operation Raptor in March 2016 the PSNI have continued to show their commitment to tackling wildlife crime by contributing to a UK initiative named “Peregrine Watch” throughout 2017.

Peregrine Watch is an ongoing initiative to prevent and stop any peregrine persecution and this can include theft of eggs and chicks from nests and/or the killing of adults and/or chicks through poisoning, shooting or trapping at any time of the year.

The PSNI have been using the latest technology to help prevent and combat wildlife crime. Small Unmanned Aircraft(SUA), more commonly known as ‘drones’, fitted with specialist cameras, have been used throughout the nesting season to monitor ‘hot-spot’ areas across Northern Ireland where crimes against birds of prey.

Among these was a nest site in Co. Armagh at which persecution has been recorded for at least the past 30 years, and for the first time in 15 years a pair of peregrines at this site was successful in producing young. In total, 138 peregrine chicks have fledged this year, compared to the average annual production of 109. We still recorded a number of suspected persecution incidents, but overall this was certainly lower than in an ‘average year’.”

PSNI Wildlife Liaison Officer, Emma Meredith, said, “We are delighted to have been of assistance in the fight against wildlife crime, and are pleased to be able to continue to work with our partners. As far as we are aware, the Police Service of Northern Ireland is one of the first Police Services in the UK to use this technology in this way. We are pleased to be able to effectively target hotspot areas and areas further afield as and when required so we can work with our partners in the hope that we can all prevent this type of crime and reach our ultimate goal to combat wildlife crime.

She continued “The Police Service of Northern Ireland take all types of crime seriously and this includes wildlife crime such as shooting, poisoning or trapping of birds of prey. On occasions, baits (examples such as a rabbit carcass or sausages) have been laid laced with poison in the public domain. Be under no illusion that some poisons could also be fatal to humans, not only wildlife suffers but also any child, adult or pet could find and ultimately consume poisoned baits. Given the potential dangers of this and other poisons, for the first time PSNI began to use the PSNI drones fitted with specialist cameras to assist in prevention and if possible catching the perpetrators, who if caught will be reported to the Public Prosecution Service. I would also ask if anyone find what they suspect to be a poisoned bait or suspicious dead bird to leave it in situ and call the police on 101.”

Sgt. Scott Fallis said, “I was very happy to be involved with Peregrine Watch, and have been involved with NIRSG scientists over the last couple of breeding seasons in monitoring nest sites, and ringing peregrine chicks. This is an element of wildlife crime which PSNI take very seriously to ensure these birds are protected for future generations to enjoy. We will robustly investigate any form of persecution of these birds not only at nesting time but throughout the year, alongside any other protected species.”

The NIRSG additionally said “The impact of the Peregrine Watch initiative in its pilot year on the successful breeding of peregrines has been very positive. The peregrine population here in Northern Ireland is already under pressure from many natural causes but we also lose a number each year to illegal poisoning, shooting and trapping, particularly during the nesting season when they are most vulnerable. The use of drones has enabled the PSNI to survey hard to reach areas, meaning there is no hiding place for wildlife criminals who seek to persecute these protected birds.” 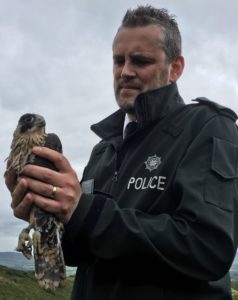 NIRSG scientists, along with PSNI officers, were also able to carry out the fitting of leg-rings, under special licences, at a number of sites across the country, as part of ongoing research studies on this species. In addition to the monitoring carried out by PSNI, NIRSG scientists have also been installing covert cameras under licence, in order to monitor adults and nestlings and to identify individual peregrines, including those which are fitted with leg rings. There have been great results recorded at a number of sites, including identifying a female peregrine by her leg rings, originally born in Co. Kildare, which had two chicks this year in Co. Armagh. This information contributes to knowledge about the movements of peregrines and their survival, and ongoing monitoring by remote cameras across Northern Ireland will continue indefinitely. 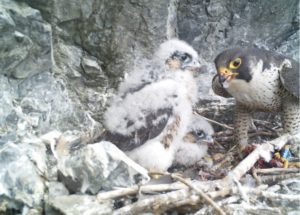