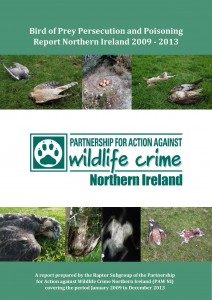 In the five years from 2009 to 2013 there were 30 illegal poisoning or persecution incidents, affecting 33 protected raptors (birds of prey), confirmed in Northern Ireland according to a report published today by the Partnership for Action against Wildlife Crime Northern Ireland (PAWNI).

The most frequent casualty was the buzzard (19 birds) followed by the recently re-introduced red kite (7 birds) and then peregrine falcons (4 birds).  Other raptor species that were recorded included a white-tailed eagle, a golden eagle, sparrowhawk and a merlin.

There were a further 10 confirmed incidents of illegal poisoning of other wildlife or poisoned baits in circumstances where birds of prey were potential victims. Red kites and buzzards, the most frequently recorded victims, are particularly susceptible to poisoned baits as they will feed on carrion routinely.

There were an additional 4 probable raptor crimes (including another white-tailed eagle) and 8 incidents where secondary rodenticide poisoning was recorded.

The report is the result of the work of the Raptor Subgroup of PAWNI facilitating cooperation between the Police Service of Northern Ireland (PSNI), Northern Ireland Environment Agency (NIEA), Northern Ireland Raptor Study Group (NIRSG), Royal Society for Protection of Birds (RSPB) and National Wildlife Crime Unit (NWCU) and analyses the results of post-mortem and toxicology testing carried out via Agri-Food & Biosciences Institute (AFBI) and as reported via the Wildlife Incident Investigation Scheme (WIIS).

Minister for the Environment and Chair of PAWNI, Mark H. Durkan, welcomed the publication of the report and said “It is a great shame people here are poisoning these wonderful, majestic creatures which brighten up our skies and countryside. I very much condemn the reckless and illegal actions of the minority in our midst who destroy beauty with painful death, leading to the loss of such iconic species. I urge the public to be vigilant and report offenders.”

Superintendent, Brian Kee, PSNI service lead for rural and wildlife crime, said “This report highlights the continued disregard for public and wildlife safety displayed by a small number of individuals in Northern Ireland. These actions which destroy our native wildlife are illegal and the indiscriminate use of such toxic poisons may affect not only raptors but also children, pets or livestock. I would urge anyone with any information on these types of crimes to report this to the PSNI on 101 or anonymously via Crimestoppers on 0800 555 111 and be assured of PSNI continued efforts in the tackling of wildlife crime”. 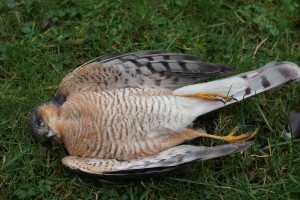 The report lead author, Dr Eimear Rooney (Raptor Officer for NIRSG) said “The overall aim of collating the information in this report was to support government, policy and enforcement agencies to help us all, from authorities to the general public, to understand the scale and distribution of these incidents. I cannot bear to think about the deaths of these individuals, in particular the losses of both golden and white-tailed eagles and red kites, which may have a devastating impact on the survival of these populations. Working with a range of experts via the PAWNI Raptor Subgroup has allowed us to share our data and experience and produce this robust assessment which we aim to update annually.”

RSPB, NIRSG and NWCU have further welcomed the publication of the report as another step towards identifying the national frequency, timing and locations of these crimes in Northern Ireland.  The publication of this report demonstrates the value of collaborative working by these organisations to help monitor and record raptor persecution in a strategic effort to identify “hot-spot” areas and help tackle the issues as well as increase public awareness and education.