On the 8th March, at the annual Northern Ireland Raptor Study Group conference at Oxford Island Nature Reserve a new bird of prey (raptor) leaflet was launched by the Partnership for Action Against Wildlife Crime (PAW) Northern Ireland encouraging members of the public to record and report suspected cases of raptor crime directly to the Police Service of Northern Ireland (PSNI).

In living memory during the 1960s, Northern Ireland lost our last breeding golden eagles, at Fairhead in Co. Antrim. It is believed persecution, habitat loss, negative human attitudes and disturbance all played a key part in the loss of some of our breeding raptor species over the past 200 years. Amongst others we lost breeding golden eagles, white-tailed eagles, ospreys and red kites whilst buzzards were almost totally extinct.

Over time some of these species have recovered naturally or via re-introduction programmes and are hailed as conservation successes. However, each year illegal incidents of shooting or poisoning are recorded and undoubtedly the incidents detected may only be the tip of the iceberg.

Dr Eimear Rooney, recently appointed as Raptor Officer, with NIRSG, stated: “Disappointingly our volunteers detect incidents of raptor crime each year, particularly of peregrines falcons and buzzards being poisoned or shot. Some of our rarer species, such as the hen harrier, are still threatened by habitat destruction with several known nest sites having been burnt out during uncontrolled heather fires in recent years. It is important that our volunteers and the wider public learn how to detect and report raptor crimes so we can minimise the effects of illegal activities on their populations”.

Dr Jon Lees, NIEA Wildlife Officer said, “PAW NI aims to increase public awareness of crimes against our wildlife, to increase reporting of suspected wildlife crimes to the PSNI and to deter offenders in the first place. The loss of primary predators such as birds of prey from our ecosystems has serious consequences for Northern Ireland’s ecosystem, which ultimately impact a wide range of species. The barbaric and cruel methods used by the offenders to trap, poison or kill these birds would offend the majority of Northern Ireland’s citizens and these criminals can often put human lives at risk by indiscriminate use of highly toxic chemicals. The PAW NI appeal to the wider public to report these types of crimes, as they would any other crime, to help the PSNI tackle these issues. Raptor crime, or indeed any wildlife crime, simply should not be tolerated”.

Wildlife Officer for the Police Service of Northern Ireland, Emma Meredith said: “Wildlife crime incidents, particularly where they occur in remote locations, can often go unreported. I hope the information leaflet will continue to encourage members of the public to provide valuable information to the police, and help us continue to build a more accurate picture of the extent of raptor crime on our native birds in a tangible way”.

Emma, continued; “It does not matter how small each piece of information that members of the public have, it could help the PSNI protect our raptor species. I would urge people to pass this information either directly to Police on 101 or anonymously to Crimestoppers on 0800 555 111”.

“The PSNI have welcomed the stream of wildlife crime initiatives emanating from the Partnership for Action against Wildlife Crime sub-groups including deer poaching, fish poaching and now raptor crimes; the collective agreement and support by all these groups, representing such a diverse range of outdoor activities, hobbies and sports, is humbling to see in action as we are united against wildlife crime”

Often raptors in Northern Ireland are poisoned by highly toxic, illegally used substances such as carbofuran or alphachloralose, which are laid out on meat baits, such as dead rabbits or even sausages, in the open countryside. These baits are typically left uncovered and can easily be discovered not only by wildlife but also children or be eaten by pet dogs or cats with fatal consequences. Numerous incidents of pets being poisoned are also recorded every year in Northern Ireland. These types of activities should not be tolerated and present a serious risk to human health and the perpetrators simply do not seem to have a conscience in this regard.

Bob Elliot and Adam McClure, with RSPB, both reinforced this message and they stated: “This issue is of critical importance to our native raptors and notably to the re-introduced red kite population. Over the last 12 months we have lost four red kites to illegal poisoning including the deaths of adult birds but also red kite chicks still at the nest. We must deploy every available tool in the ongoing fight against wildlife crime and it’s vital that everyone is encouraged to report these crimes to the police.”

This leaflet is aimed to disseminate information, and particularly improve awareness, detection and reporting of raptor crime throughout Northern Ireland. Crime prevention through education and awareness raising plays a vital role in reducing criminality and anyone with information on raptor crimes are urged to contact their local PSNI. 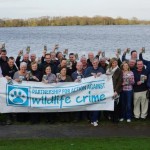 Photo of the leaflet launch on 8th March, with delegates at the annual raptor conference, Oxford Island, Lough Neagh 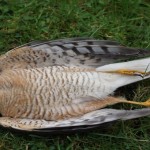 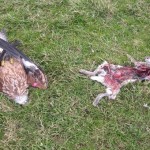 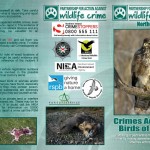 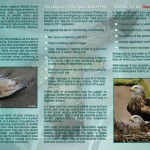